As November 3 nears, there’s no shortage of theories about what a Trump or Biden victory could mean for the stock market.

We’ve Been Here Before

This debate isn’t unique to the 2020 U.S. presidential election; similar questions arise every four years. And sometimes, the election results coincide with large market moves. Many will recall that futures markets had the S&P 500®  Index down more than 5% the evening of the 2016 election, only to finish in positive territory the day after the election.

As investors are constantly bombarded by headlines about the latest polls and suggested policy or tax reform, it’s easy for them to take all this uncertainty, boil it down to a single event like an election and worry about what it could mean for their portfolios.

Maybe it would be safer to just sit on the sidelines and let it all pass? In the words of the famous football coach and sports commentator Lee Corso—“Not so fast, my friend.”

How Does the Stock Market Behave Around Elections?

Going back to 1928 when Herbert Hoover defeated Al Smith (444-87 in the electoral college), we have data for 23 presidential elections through 2016. This isn’t a very large sample size, but we aren’t trying to get too precise with our analysis, so bear with us. We looked at returns in the three months leading up to the month of the election (August through October), and both the three months and six months after the month of the election (December through February and December through May) for all 23 elections. Figure 1 illustrates the results.

What do we find? On average, returns are positive in all three periods for the 23 election years but returns vary widely. For example, the average return for the six-month period following the election month is about 7.5%, but the range goes as far as about -14% to more than +56%.

In Figure 2, we show the same data but with the winner of each election and his party (red for Republican and blue for Democrat). Continuing to focus on the six-month period following the election month, returns were higher following Democrats’ victories (11.1% vs. 3.5% for Republicans). They were also higher for challengers over incumbents (9.4% vs. 5.4%).

Does this mean a Biden victory is likely to lead to better returns over the next six months? No. From what we see, there is no statistical evidence that could point to that. 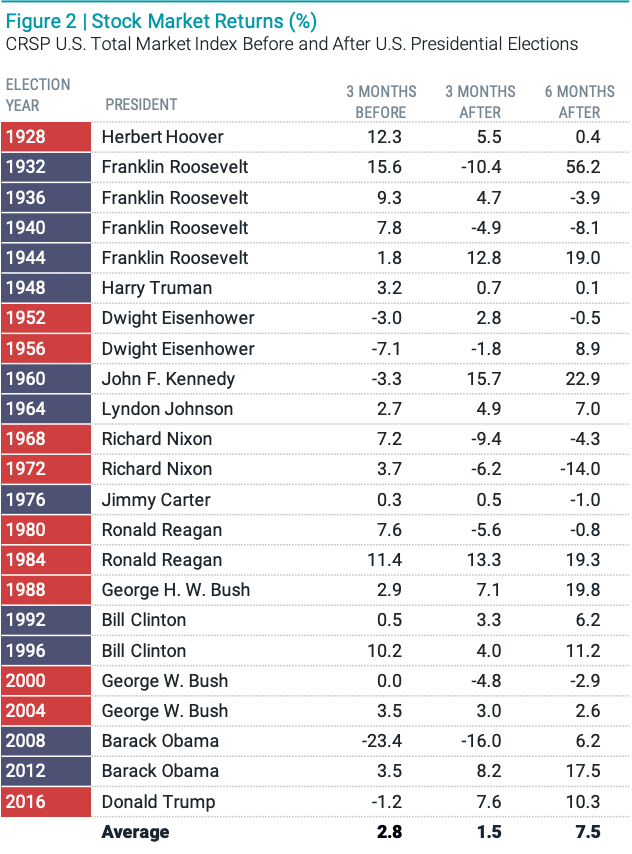 Let’s zero in on one former commander in chief to put this into context. Franklin Delano Roosevelt (FDR) was victorious four times, first in 1932. The average return for the six-month period following his victories was 15.8%.

But again, averages don’t tell the whole story. For example, if we take out the period following his first victory, which includes the spring of 1933—a period often pointed to as the beginning of the recovery from the Great Depression—that average falls to just 2.3%.

Why is that important? Those four elections had a lot in common—the same individual, same party, etc.—but vastly different results following each election. This reinforces the importance of looking beyond the election.

What About Value and Growth?

The growth versus value debate seems just as vigorous as those surrounding the election. Many observers insist a “new economy” has left value behind for good, while others quickly point to the long-term historical outperformance of value stocks and how high fundamental ratios are for U.S. growth stocks relative to other parts of the market. Has the outcome of the presidential election meant anything for the subsequent performance of growth and value stocks? 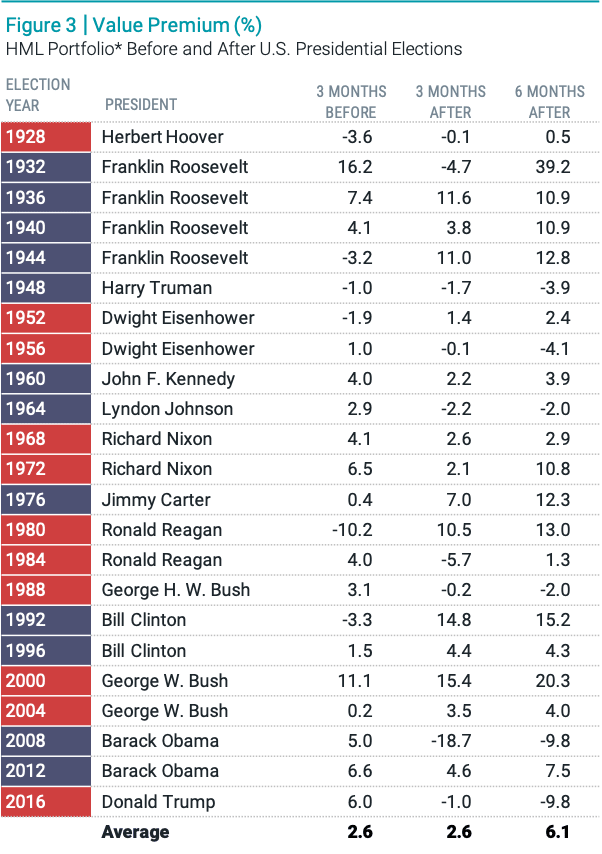 Data from 7/31/1928-5/31/2017. Source: Ken French’s Data Library. http://mba.tuck.dartmouth.edu/pages/faculty/ken.french/data_library.html. *High Minus Low (HML) is a component of the Fama-French three-factor model. HML refers to the outperformance of value stocks over growth stocks.

As we saw with market returns, the value premium has been positive, on average, in the months leading up to and following the last 23 U.S. elections, but again we see a wide range.

Does this mean a Trump victory isn’t as beneficial for value stocks as a Biden victory? As with market returns, this answer again is a resounding “No.” We can’t say that with any certainty. Presumptions in a vacuum are dangerous and should be avoided.

While policy decisions and the regulatory environment no doubt have an impact on the economy and markets, these are only a few among a long list of factors. Investors are individually and collectively assigning probabilities on these and other inputs as they agree to buy and sell securities in the market, building expectations about the future into market prices.

What’s the takeaway for investors? While the election will dominate headlines over the next couple of months, don’t worry about its impact on stock market returns. Regardless of your expectations about the outcome, step back and think about the bigger picture. If you work with an advisor, you likely have a long-term financial plan that has been designed with the uncertainties around these sorts of events in mind.

S&P 500® Index. The S&P 500®  Index is composed of 500 selected common stocks most of which are listed on the New York Stock Exchange. It is not an investment product available for purchase.

Book-to-market. Compares a company’s book value relative to its market capitalization. Book value is generally a firm’s reported assets minus its liabilities on its balance sheet. A firm's market capitalization is calculated by taking its share price and multiplying it by the number of shares that it has outstanding.