The Illusion of Wealth

If given the choice of receiving $100k at the start of your retirement or $500 per month for the duration of your retirement, which would you choose? What about $200k versus $1k per month? Which option seems more adequate—the lump sum or monthly amount?

In reality, an annuity purchased for $100k would result in a guaranteed lifetime income of about $500 per month while one bought for $200k would yield roughly $1k per month. So, these lump sums and annuitized streams are economically equivalent. But are they psychologically equivalent?

My colleagues Dan Goldstein and Shlomo Benartzi and I have investigated this question in several studies involving thousands of middle-age adults (approximately ages 40-60) with varying incomes, educational levels and ethnicities. In one study, for example, we asked a group of people if they thought $100k, $200k, $1m or $2m would be adequate to fund their retirement years. To keep things well controlled, we told them to imagine that each sum represented the total amount of money they would have to spend in retirement. We asked a separate research group how adequate these same amounts would be as monthly income of $500, $1k, $2k and $4k.

Not surprisingly, as shown in the figure below, a lump sum of $100k didn’t rate very high on perceived adequacy. Our research participants gave it roughly a 2.25 on a scale of 1 to 7, where 7 represented “totally adequate.” But participants didn’t think about $500 per month in the same way. That amount garnered roughly a 1.75 on our seven-point scale. And the same was true for the $200k lump sum (which averaged a 2.5 rating) and the annuity of $1k per month (which rated a 2). 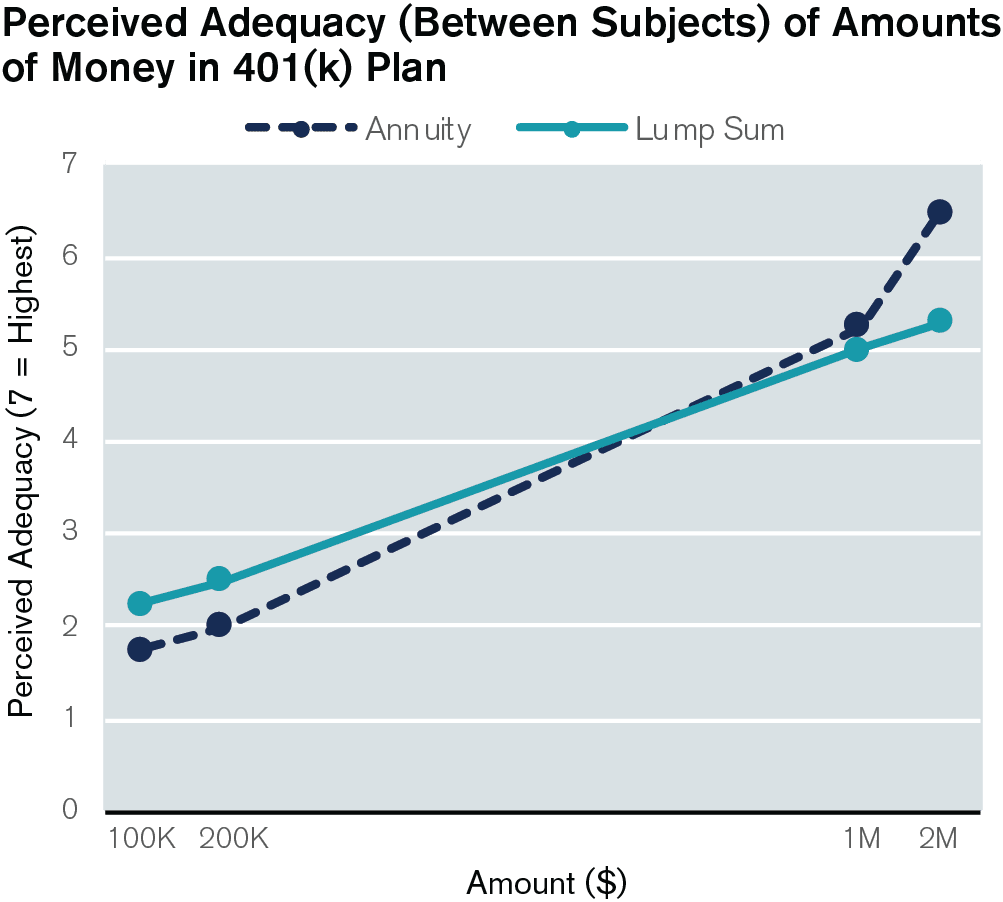 Although lump sums and their equivalent monthly amounts are financially the same, they are not psychologically equivalent. At times, lump sums may seem like they are worth more than their resulting annuitized streams. This matters for more than just simple perceptions of adequacy. When offered a $200k lump sum versus an equivalent $1k monthly annuity, research participants in another of our studies were more motivated to increase their retirement savings (in a hypothetical context) when seeing the annuity compared to the lump sum. In other words, the $1k monthly annuity seemed less adequate and therefore boosted savings intentions.

What’s going on here? When people think about how much money they’ll have for the future, more money will always seem better. But the mode of distribution—a lump sum or a monthly amount—will change perceptions of that wealth. From mortgages to car payments to credit card statements, we typically have more experience dealing with monthly amounts of money and whether a given amount will cover our expenses on a monthly basis.

As a result, it appears that people are more sensitive to changes in wealth expressed in monthly terms. This sensitivity can set up an interesting situation in which people perceive monthly amounts as less attractive than lump sums at lower levels of wealth (e.g., $100k lump sum versus $500 monthly). At lower levels of wealth, people can more accurately judge just how little a given amount would get them. We call this situation the “illusion of wealth.” Yet, people see monthly sums as more attractive at higher levels of wealth (e.g., $2m lump sum versus $4k monthly income) where people can more accurately judge just how much a higher amount would buy them, or the reversal of the illusion of wealth.

These illusions can affect other financial decisions as well. Claiming Social Security benefits early, for example, results in slightly lower monthly payments over the course of retirement. When the earliest claiming age was 62, workers would forgo $119 per month if they claimed benefits at 62 compared to 63. Over time, however, that same amount in lump-sum form would be equal to about $21,492. The illusion of wealth would suggest that the $21,492 lump sum seems larger and therefore a more painful amount to give up compared to the $119 monthly payment.

But it’s not just large decisions like retirement claiming age that are relevant. Consider the case of liabilities. Focusing on small monthly payments spread out over time can have detrimental effects on overall financial well-being if we simultaneously ignore the effects of compounding interest.

Taken together, we might be better served to question the format that we use when we consider a variety of important financial decisions. Each number—whether it is a monthly amount or a lump sum—is probably not sufficient to use as the basis for a well-informed decision. Rather, when making saving, spending and investment decisions, we are likely better served by having an understanding of both the sum and its broken-out parts.

The information in this document does not represent a recommendation to buy, sell or hold security. The trading techniques offered in this report do not guarantee best execution or pricing.