Significant federal government spending in 2020 has led to speculation about the status of the U.S. dollar as a reserve currency. In a July interview with CNBC, Treasury Secretary Steven Mnuchin said the Treasury wants to protect the dollar’s status as the global reserve currency. Still, investors may wonder how a depreciating dollar could affect their investments.

Is a weaker dollar something new or have we seen it before? In this article, we’ll explore the relationship between currency movements and stock returns to make the case for a diversified allocation across global equity markets.

Currencies move. Exchange rates have had dramatic swings, even in the recent past. We’ve been living in a period of a strong dollar, but things were different just 10 years ago. In Figure 1, we plot the exchange rates for several well-known currencies against the U.S. dollar (USD) over the last 20 years—the euro, British pound sterling (GBP), Japanese Yen, Australian dollar and Canadian dollar.

The dollar lost significantly versus other currencies in the 2000s and later became stronger—particularly after 2013. The idea of a weaker dollar is nothing new and shouldn’t cause concerns about uncharted territory. Figure 1 also illustrates that while the dollar’s strength or weakness can last for long periods, it can reverse relatively quickly as well.

FIGURE 1 | THE UPS AND DOWNS OF THE U.S. DOLLAR ARE NOTHING NEW 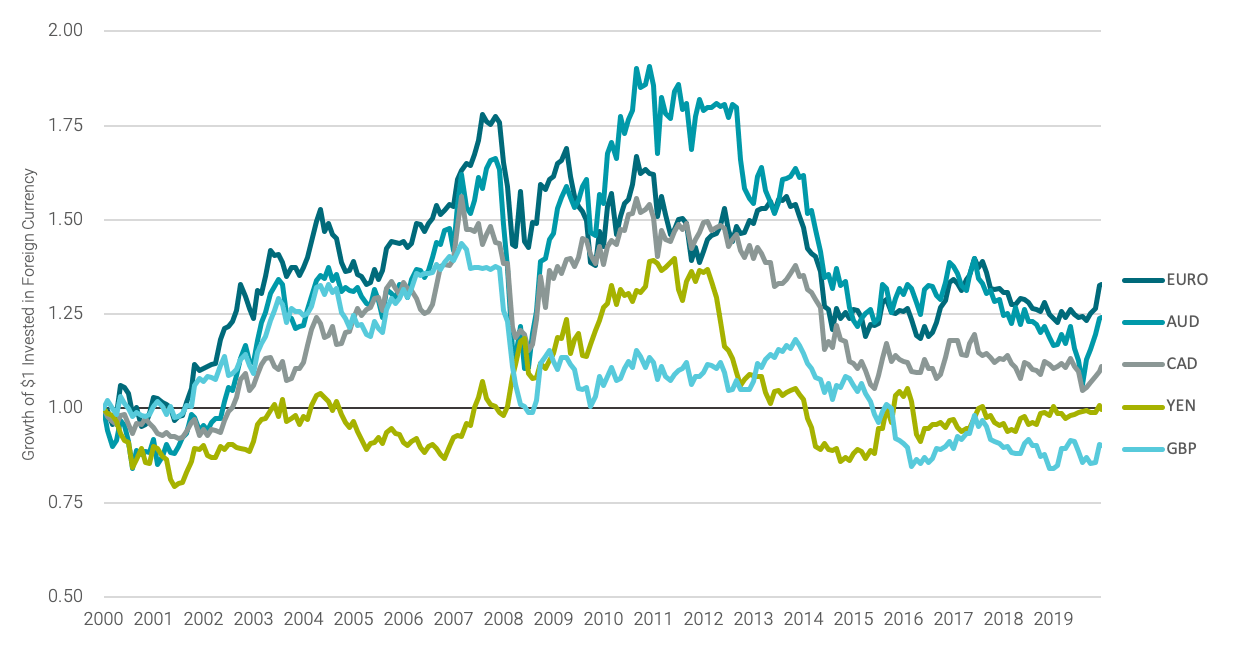 In Figure 2, we show the growth of a U.S. dollar for U.S. and non-U.S. developed stocks, all priced in USD as a U.S.-based, unhedged investor will experience them, over the same period. During the 2000s, the U.S. dollar weakened, which coincided with international stocks doing better than U.S. stocks. After 2009, the roles reversed, and the U.S. dollar strengthened. And over the last 10+ years, U.S. stocks outperformed.

U.S. stocks are up 5.41% year to date as of September 30, compared to -6.70% for non-U.S. developed stocks and -1.29% for emerging markets. This represents part of a longer trend over the last several years, where U.S. stock returns have significantly outpaced both international developed and emerging markets. Figure 3 shows returns over the last three, five and 10 years.

A quick glance at this chart might make investors second-guess why they have an allocation to non-U.S. markets. We don’t have to wind the clock too far back to show how different this picture can look. Figure 4 shows the same indices as Figure 3, but with a different end date—September 2009. The 10-year period ending in 2009 is often referred to as the “lost decade” for U.S. stocks because returns were flat over that period—much lower than their historical average annual return of approximately 10%.

Exchange Rates Have an Impact

What role do currencies play in this equation? When investing in companies outside the U.S., the exchange rate between the USD and currency of the investment opportunity can play a significant role. Consider an example where you buy stock of a U.K.-based company trading at £60 per share. You buy 100 shares for a total purchase price of £6,000. The exchange rate at the time of your investment is $1.50 per £1, so your purchase price is $9,000. (100 x 60 x 1.5 = 9,000)

Does this mean currencies are the only factor in determining returns for U.S.-based investors allocating capital internationally? No, that’s hardly the case, but they definitely play a role. In fact, new research from Karolyi and Wu makes strides in evaluating how currency risk is priced in global stock returns.* We believe this is another reason why it makes sense to embrace diversification.

MSCI Emerging Markets (EM) Investable Market Index (IMI). Captures the performance of large-, mid- and small-cap stocks across 26 emerging markets countries and covers about 99% of the free float-adjusted market capitalization in each country.

MSCI World ex USA Investable Market Index (IMI). Captures the performance of large-, mid- and small-cap stocks across 22 of 23 developed market countries, excluding the U.S., and covers about 99% of the free float-adjusted market capitalization in each country.

Russell 3000® Index. Measures the performance of the largest 3,000 U.S. companies that represent about 98% of the investable U.S. equity market.

Unhedged. Not holding investments designed to reduce the risk of an adverse price in another investment.