The Current State of SPACs

Back in 2020, special purpose acquisition companies, known as SPACs and sometimes referred to as blank-check companies, gained newfound fame among investors. SPACs are investment vehicles that undergo an initial public offering (IPO) to raise capital for the purpose of later identifying a private company and forming a merger agreement to take the company public.

As SPAC IPOs began to rise in 2020 amid the broader demand for public capital and the eye-catching headlines of SPACs merging with flashy startups like flying taxi services, investor interest soared as well. But looking at the SPAC market today provides a sobering reminder of why we think investors should approach investment fads with caution.

The number of new SPAC IPOs and the amount of capital they raised set records in 2020 and 2021.1 SPAC IPOs peaked in the first quarter of 2021 with nearly $100 billion in raised capital from around 300 IPOs. Since then, we’ve seen the pace drop off significantly. SPAC IPOs over the first two quarters of 2022 raised just over $12 billion. 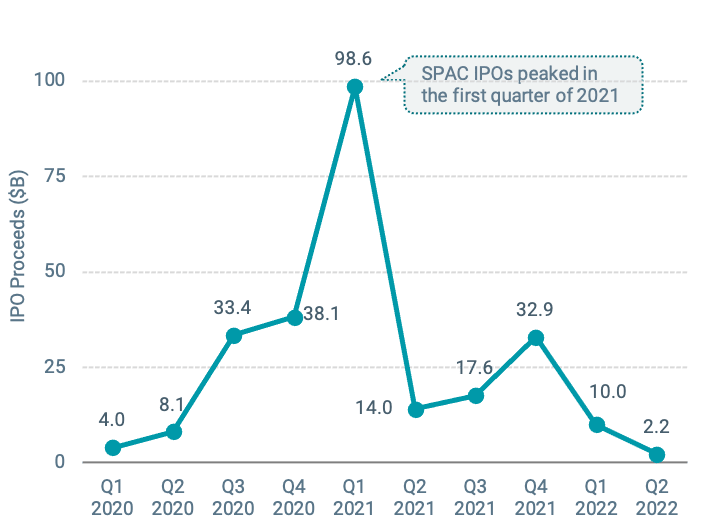 As SPAC and traditional IPO proceeds are down in 2022, a more telling insight may come from the shifting balance between them. SPACs made up well over half of the assets raised through all IPOs in the first quarter of 2021, but traditional IPOs outpaced SPACs in each remaining quarter of the year.2

While SPACs have managed more proceeds than traditional IPOs so far in 2022, though at far lower levels than the prior two years, it seems clear that SPACs have not replaced IPOs as a preferred method for companies to go public.

We don’t know the cause of this decline in SPAC activity, but a few potential drivers have been documented. First, the U.S. Securities and Exchange Commission (SEC) announced in late 2021 that tighter regulations were likely forthcoming and proposed new rules for SPACs in March 2022. If finalized, these new guidelines would appear to reduce some of the differing requirements between SPAC merger IPOs and traditional IPOs.

Another potential driver has been SPAC IPO shareholders’ high redemption rate at the time of mergers, which reduces the capital available to the SPAC for completing a merger.

Another interesting finding emerges when we look at SPACs that have gone public over the past few years. Many SPAC sponsors have been left searching for target companies. A key feature of SPACs is an 18- to 24- month deadline to identify and sign an acquisition agreement with a target company. If the SPAC sponsor fails to complete a merger by the deadline, the SPAC must liquidate and return the cash and accrued interest to shareholders.

As of the end of July, nearly 600 SPACs were searching for merger targets, and more than 100 had announced mergers that have not yet been completed. The total capital raised by SPACs still seeking a merger is currently more than $140 billion, with over $30 billion facing deadlines in 2022.3

We’ve already seen high-profile SPACs with well-known sponsors like Bill Ackman’s Pershing Square Tontine Holdings announce plans to liquidate this year. To date, the six liquidations from SPACs that went public in 2020 are the most for any year since 2010.

Figure 2 | Many SPACs Are Facing Deadlines to Complete Mergers 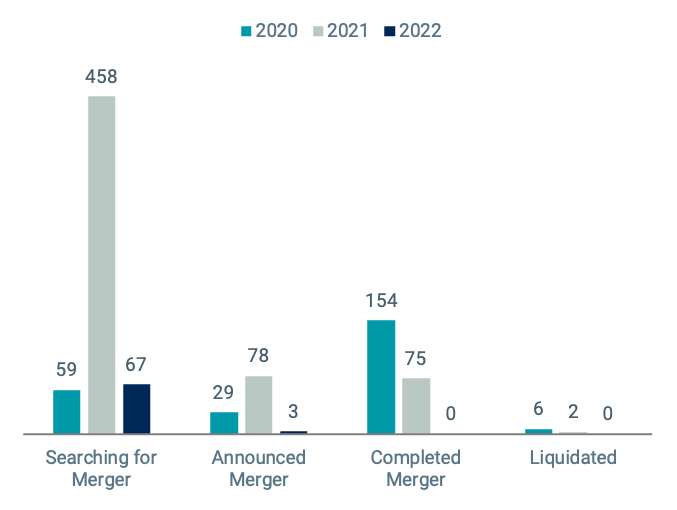 As SPAC sponsors compete for merger targets during heightened market uncertainty, SPAC IPO shareholders risk not finding a target company. While SPACs are set up to offer investors protection from losses in the event of a SPAC liquidation, earning back the initial cash plus interest is effectively a fixed-income investment and may not align with the goals investors had in mind when they purchased the holding.

University of Florida and University of South Carolina researchers looked at SPACs that launched between 2010 and 2020, finding that liquidations resulted in an average annual return to SPAC shareholders of just 2%.4

For those that invest in companies resulting from SPAC mergers, potentially aiming to “get in on the ground floor” of a new public company, the returns have also likely disappointed. Minmo Gahng and his co-authors found the equal-weighted one-year returns for post-merger SPAC companies that merged between 2010 and 2020 were negative and far lower than those of traditional IPOs and the broader U.S. stock market.

It’s worth noting that SPAC IPO investors may receive both shares and warrants (a right to buy shares of the post-merger company at a specified price). On average, these warrants have earned positive returns after completed mergers. But Gahng, et al., estimate the benefits of these warrants are insufficient in overcoming the meaningful losses on post merger common shares. 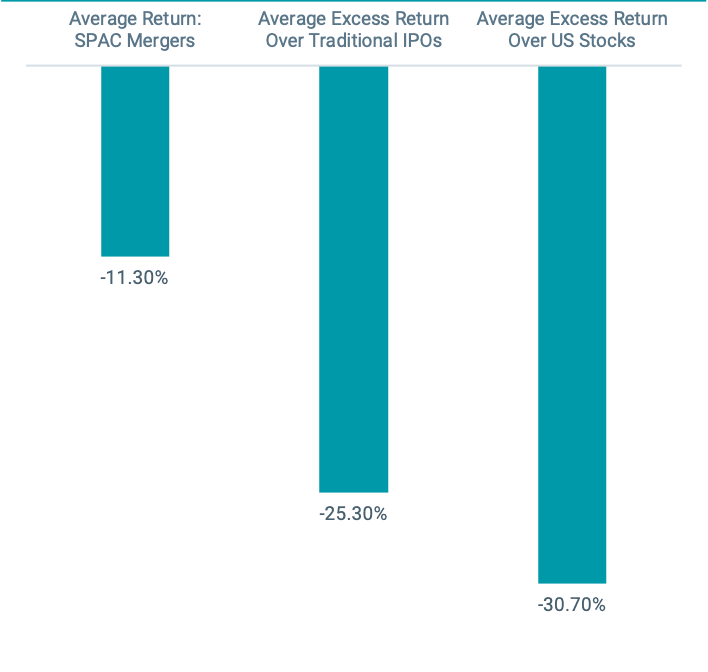 The SPAC market’s rise and the bumps in the road that have followed remind us that investment fads come and often go. There’s still much to be seen regarding how the SPAC market will evolve with pending regulation or how investors in SPAC IPOs and post-merger SPAC companies will fare going forward.

We believe it remains prudent for investors to maintain commonsense investment principles. Investors that consider SPACs are likely well served to understand the terms of each opportunity, the rights of investors and sponsor incentives. Even if all these boxes can be checked, it remains an investment in a single company, so the outcome depends almost entirely on the company’s ability to succeed.

Diversification is one of the most basic principles of investing, and its benefits are always worth remembering. Over the long term, market returns have historically demonstrated that diversified investors have been rewarded.

An investment in SPACs presents different risks depending on what point in the SPAC life cycle shares are purchased including the risk that the acquisition may not occur or that the customer's investment may decline in value even if the acquisition is completed. Investors who purchase in the secondary market after an acquisition announcement may suffer a loss if the value of the shares subsequently declines. There is also the risk that SPAC managers are inexperienced or unqualified and this risk can be made more pronounced by lack of any operating history or past performance of the SPAC.