In September, we reported on the returns of U.S. stocks during economic business cycles of the past 50 years. There’s reason to believe the U.S. is currently facing a slowdown induced by higher interest rates (i.e., a slowdown in consumer spending) despite positive gross domestic product (GDP) growth during the last quarter following two quarters of negative growth.

The strength of this slowdown is not known, as with recessions whose start and end dates are not identified until well after the fact when the National Bureau of Economic Research (NBER) has sufficient data to make a clear judgment. But we can look to the past to understand how stocks have performed historically both during and coming out of periods of economic contraction.

In our September article, we showed that the average monthly return for U.S. stocks during recessions has, on average, been slightly negative and well below their long-term average. What’s driven this result has been significantly negative returns during the first half of recessions. U.S. stocks have actually experienced strongly positive average returns in the second half of recessions as the economy shows signs of recovery, leading into a period of economic expansion.

While there is no guarantee of what’s to come, these results seem to offer some reason for optimism for those invested in stocks today. But given that many investor portfolios hold a mix of stocks and bonds, this article examines how bonds have performed historically during past recessions and expansions. We also look at volatility during past business cycles, which highlights the need to be ready for bumps in the road even when a recovery is in sight.

What Does a Recession Mean for Bond Returns?

As for stocks, it’s also been a tough year for bond investors. While most U.S. bond sectors have outperformed the broad U.S. stock market, most have still seen losses year to date. U.S. Treasuries and U.S. corporate bonds have experienced steep drawdowns, but there’s no denying the pain has been greater for corporate bondholders.

So, how have bonds performed during and after recessions historically? Figure 1 presents average monthly returns for Treasuries and corporate bonds during the first and second halves of recessions and expansions over the past 50 years as defined by the NBER. For comparison, we added this data to our prior results for U.S. stocks.

Figure 1 | U.S. Corporate Bond Returns Have Historically Been Strongest in the Second Half of Recessions 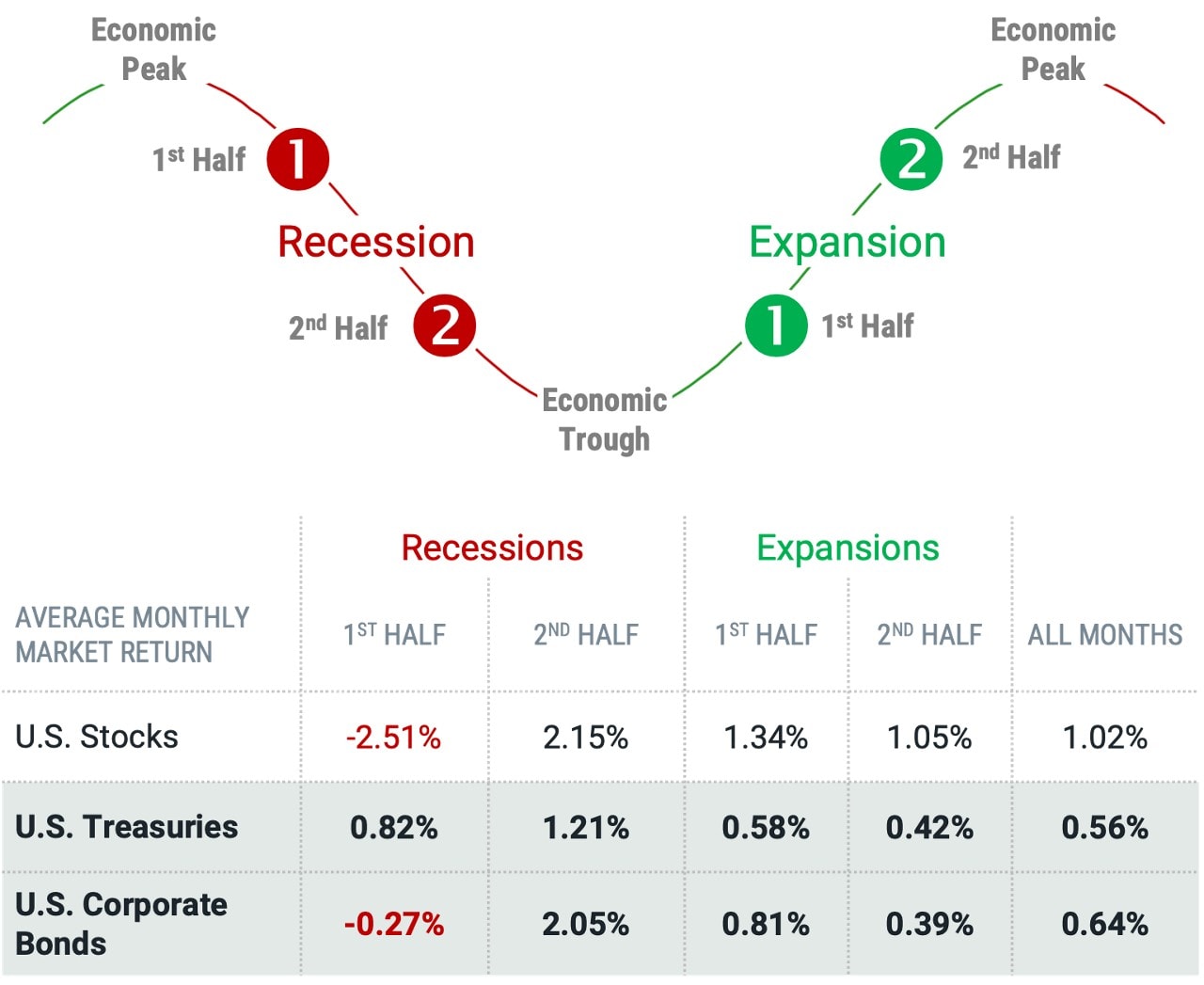 Data from 1973 – 2021. Source: Avantis Investors. U.S. stocks are represented by the CRSP U.S. Total Market Index. U.S. Treasuries and U.S. corporate bonds are represented by the Bloomberg U.S. Treasury Index and the Bloomberg U.S. Corporate Bond Index, respectively. The average number of months over the period from Peak to Trough is 10.7, and the average number from Trough to Peak is 71.9. Past performance is no guarantee of future results.

U.S. Treasuries have similarly experienced above-average returns in the second half of recessions, but in the first half of expansions, results have been muted and near their long-term average. The notable difference for Treasuries relative to corporate bonds and stocks comes in the first half of recessions. When U.S. stocks and corporate bonds have historically performed the worst, Treasuries have delivered returns above their long-term average.

What can we take away from these results? First, when markets are pricing in a slowdown in the early days of a recession, risky assets are expected to do worse than assets with stronger backing, as in the case of Treasuries secured by the strength of the U.S. government. Then, as prices incorporate information during tough times, risk premiums in the bond market tend to increase. The difference in yields of corporate bonds versus Treasuries, also known as the credit spread, often becomes wider, and the expected returns of corporate bonds become more attractive. 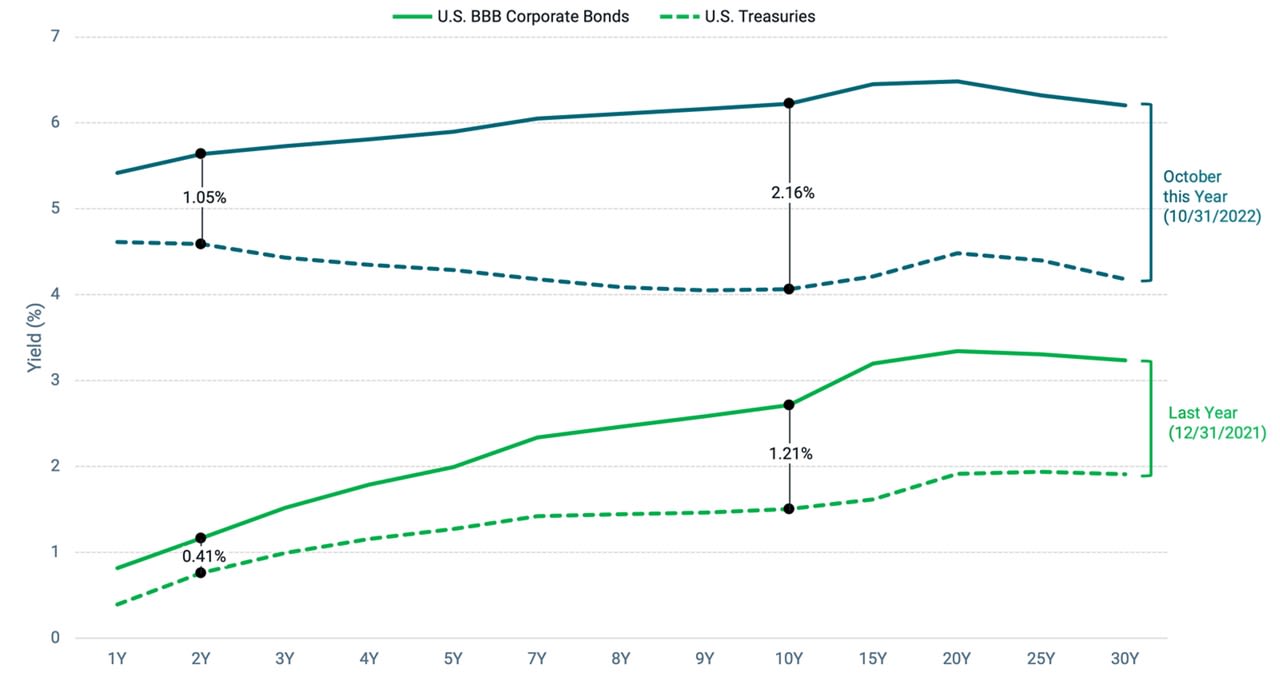 Data as of 10/31/2022. Source: Bloomberg. Yield is a general term that relates to the return on the capital you invest in a bond. Price and yield are inversely related: As the price of a bond goes up, its yield goes down, and vice versa.

Today, 10-year BBB-rated corporate bonds are yielding more than 2 percentage points above that of 10-year Treasuries and up about 1 percentage point from the end of last year.

Another notable observation is that the Treasury curve is inverted today in intermediate maturities, meaning shorter-maturity Treasury bonds (e.g., 2- year maturity) are yielding more than longer maturities (e.g., 10-year maturity). This tells us something about expected returns.

A Treasury market index, for example, which offers a snapshot of the current market, will hold the distribution of Treasuries based on bonds outstanding, failing to account for these differences in expected returns

While investors have likely been disappointed by bond returns to date in 2022, the upside is that as bond prices have gone down, expected returns have gone up. With increasing risk premiums, common during the early stages of recessions, the rise in expected returns has been even greater for corporate bonds.

The risk for investors now considering jumping out of fixed income or shifting weight from corporates in favor of Treasuries is missing out on the higher returns historically seen for corporates in the later stages of recessions when the market begins to incorporate better news into prices and the recovery begins.

It's also useful for investors to understand that while markets have recovered from many downturns in the past, it’s neither clear when a recovery begins nor guaranteed that it will be a smooth ride when it does. Most would expect market volatility to be high during the tough times. Still, an examination of the historical volatility data shown in Figure 3 reveals that stocks tended to remain volatile even in the second half of recessions when both stocks and bonds have enjoyed well-above average returns. 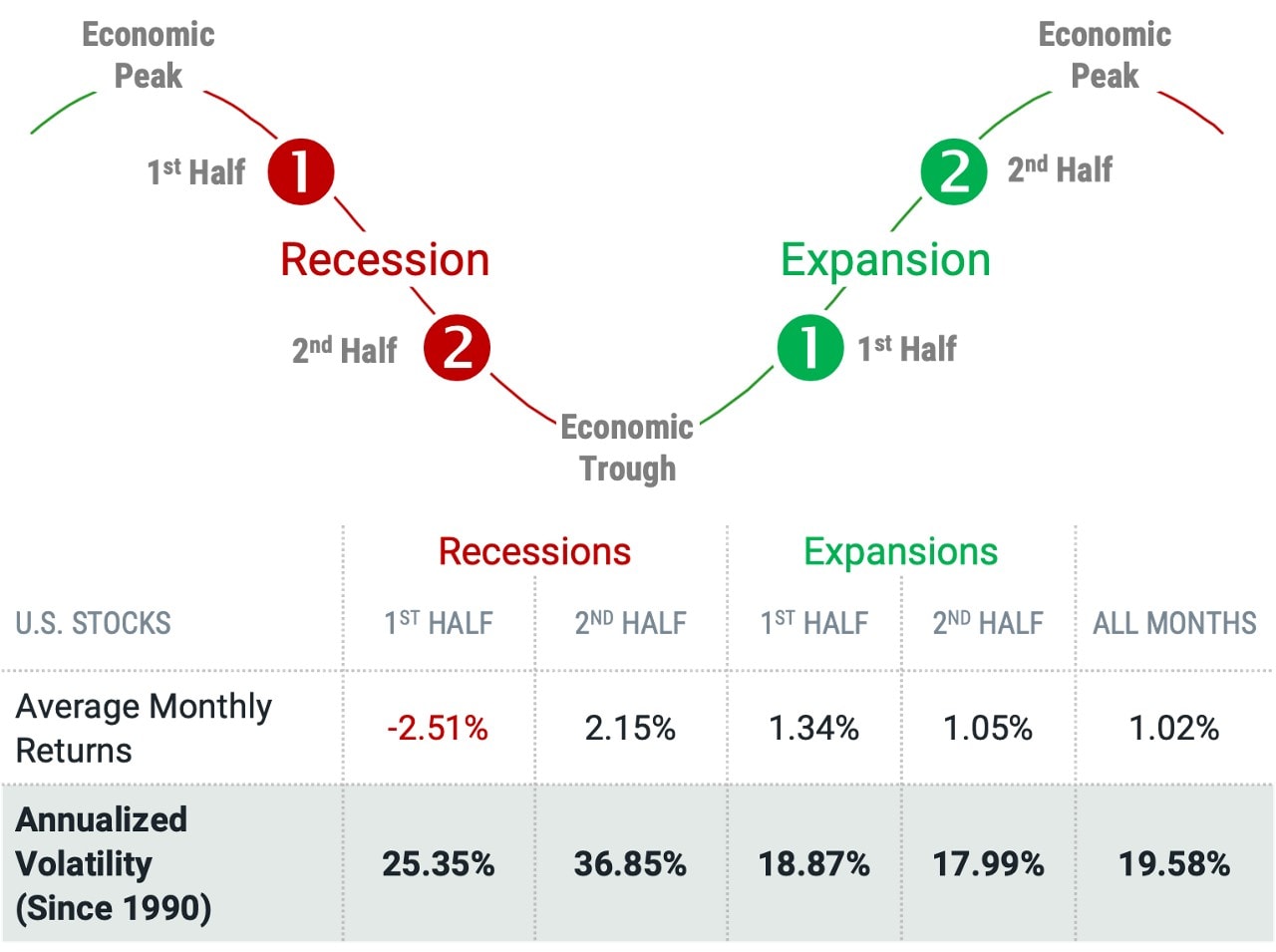 Annualized volatility (since 1990) is represented by the VIX Index, which aims to measure the stock market’s expectation of volatility based on S&P 500 Index options. VIX data begins in 1990. Data from 1973 – 2021. Source: Avantis Investors. U.S. stocks are represented by the CRSP U.S. Total Market Index. U.S. Treasuries and U.S. corporate bonds are represented by the Bloomberg U.S. Treasury Index and the Bloomberg U.S. Corporate Bond Index, respectively. The average number of months over the period from Peak to Trough is 10.7, and the average number from Trough to Peak is 71.9. Past performance is no guarantee of future results.

This tells us that good times might not always feel so good. This is another reason we believe investors are best served by setting a plan and staying the course through the good and the bad. So, buckle up and stay focused on the destination.

Corporate  Bonds: Debt instruments issued by corporations, as distinct from those issued by governments, government agencies, or municipalities. Corporate securities typically have the following features: 1) they are taxable, 2) they tend to have more credit (default) risk than government or municipal securities, so they tend to have higher yields than comparable-maturity securities in those sectors; and 3) they are traded on major exchanges, with prices published in newspapers.

S&P 500® Index: A market-capitalization-weighted index of the 500 largest U.S. publicly traded companies. The index is widely regarded as the best gauge of large-cap U.S. equities

Yield Curve: A line graph showing the yields of fixed income securities from a single sector (such as Treasuries or municipals), but from a range of different maturities (typically three months to 30 years), at a single point in time (often at month-, quarter- or year-end). Maturities are plotted on the x-axis of the graph, and yields are plotted on the y-axis. The resulting line is a key bond market benchmark and a leading economic indicator.

VIX Index: A forward-looking index that tracks the expected 30-day future volatility of the S&P 500 Index.

This material has been prepared for educational purposes only and is not intended as a personalized recommendation or fiduciary advice. It is not intended to provide, and should not be relied upon for, investment, accounting, legal or tax advice.