As of Dec. 19, 2019, there were 238 new exchange-traded products (inclusive of exchange-traded funds and exchange-traded notes) launched in the U.S. market in 2019. This placed seventh in terms of the total number of new ETP launches in a calendar year and marks the slowest pace of new launch activity in five years. There are now 2,407 ETPs available to investors. Since SPDR S&P 500 ETF (SPY) was launched in 1993, 3,355 ETPs have been brought to market. This means that about 28% of them have since been closed.

Though there are plenty of choices on the ever-expanding menu, investors’ tastes are basic. Of the 2,407 ETPs on offer, the top 100 as measured by assets under management accounted for 71% of the $4.4 trillion invested in ETPs at the middle of December. The top 100 are the Swiss Army knives in the ETP tool kit. They are efficient multipurpose tools that do a lot of different jobs for a lot of different types of investors.

These figures are all fun fodder for banter among industry watchers, but what do they mean for investors? First, they demonstrate that the best options have been on the menu for some time, right in front of your nose. Second, it means that the odds of something better coming to market continue to grow slimmer with time. It’s going to be awfully difficult to beat funds backed by solid sponsors that offer instant access to the entire U.S. stock market at a cost of 0.03% per year or the U.S. investment-grade bond universe for 0.04%. Here, I look at the class of 2019 and call out what we believe were the best and worst new ETP launches of the year.

It’s difficult to stand out in this cramped landscape. If anything, standing out can be detrimental, as the traits of successful new entrants are no different than those of existing best-of-breed funds: time-tested strategies, low fees, a solid sponsor, and--ideally--early signs of long-run viability as measured by AUM and flows. We want to have confidence that these funds will be around three, five, and 10 years from now.

A New Twist on a Familiar Formula

Our favorite new launch of the year was Avantis U.S. Equity ETF (AVUS). The Avantis name may not be familiar to many, but its leadership team is a known quantity. Dimensional Fund Advisors’ former co-CEO Eduardo Repetto and COO Patrick Keating launched the new venture in June. The firm shares a lot of common DNA with Dimensional. Both firms approach to portfolio construction is methodical, aiming to balance faith in the market’s ability to set prices with knowledge that Mr. Market doesn’t always get prices exactly right. The former belief is captured via broad diversification, the latter through tilts toward cheaper, more-profitable names.

As a subsidiary of American Century Investments, Avantis has enjoyed scale benefits from day one. This is most apparent in its funds’ expense ratios. At 0.15%, AVUS’ annual fee is significantly lower than its most direct comps in John Hancock Multifactor Large Cap ETF (JHML), which charges 0.34%, and DFA U.S. Core Equity 1 (DFEOX), which charges 0.19% and is available to a narrower audience. The only less expensive multifactor ETF in the U.S. large-cap space is Goldman Sachs ActiveBeta U.S. Large Cap Equity ETF (GSLC), which carries a Morningstar Analyst Rating of Bronze.

A fee advantage over incumbents is one feather in AVUS’ cap, but more important still are matters of process. Avantis’ approach to portfolio construction is very similar to DFA’s. The firm emphasizes broad diversification and modest factor tilts while being cautious not to find itself on the wrong side of momentum. Also, like DFA, Avantis’ funds are technically actively managed, though the managers’ discretion is limited and focused on keeping a lid on trading costs. Key differences in the firms’ processes pertain to how they define and measure value, profitability, and momentum. On this front Avantis’ take is different, particularly with regard to value. The firm’s approach to defining value looks to address many of the criticisms of using as-reported book value to assess stocks’ cheapness. The end result is a low-cost core U.S. stock portfolio that makes modest bets on known sources of excess return.

There were plenty of suspect new entrants into the ETP space in 2019. A common thread among many of them is that they prey on investors’ impulse to chase what’s hot. These funds tend to offer narrow and/or overly complex exposures, charge high fees, and have sponsors that prioritize salability over staying power.

Thematic funds tend to feature prominently on our list of the year’s worst new launches. This year is no different. These funds generally attempt to leverage a compelling narrative into something salable--though not always worthy of an investment. These funds have a tall task, as they generally have to get three things more or less right to succeed for investors: 1) the theme, 2) the portfolio, and 3) valuations.

Not all themes have staying power. Many thematic funds don’t have portfolios that align with their theme to the extent investors might expect. And even if the first two pieces of the puzzle are in place, if the valuations of the stocks best positioned to capitalize on the theme have already priced in the prevailing narrative of extraordinary growth, then longrun returns are likely to disappoint. The first of this year’s worst new ETFs fails on multiple counts.

Out of This World Returns?

Thematic funds are typically served up with a story. I present to you the pitch for Procure Space ETF (UFO), taken directly from its sponsors’ website:

“Since the beginning of humankind, our ancestors have looked to the skies with immense curiosity in search of answers. Space has always captured human interest, but recently, the space economy has also captured commercial interest like never before. UFO, the Procure Space ETF, may provide diversification beyond the limitations of solely earthbound companies.”

A closer look at UFO’s portfolio shows a number of companies that operate beyond earth’s atmosphere but are still well within its orbit. Its top three holdings include a pair of names familiar to many earthlings: Garmin (GRMN) and Sirius XM Holdings (SIRI). Those expecting exposure to the furthest edge of the galaxy may feel let down, especially as both stocks, which account for about 12% of UFO’s portfolio, have out-of-this world valuations. As of mid-December, based on Morningstar equity analysts’ fair value estimates for each, Sirius XM’s shares were trading at a 28% premium to fair value and Garmin’s were 27% above their estimated worth. Investors looking to the stars would probably be best served to keep their feet firmly on the ground and not get on board UFO.

There were a host of funds launched this year that aimed to capitalize on the fast-growing cannabis market. Investors piled money into some of them, most notably ETFMG Alternative Harvest ETF (MJ). Much of that money has subsequently gone up in smoke. This is an example of a theme that seems to have staying power and one where funds’ portfolios generally line up well with the theme, given the number of pure-play public companies that operate in this space. However, these companies’ valuations have gotten higher than may be justified by their long-term growth prospects. Performance has suffered as a result. MJ has fallen more than 50% since its March 2019 peak.

The worst of the lot among this crop of pot-themed ETPs is a newer entrant. MicroSectors Cannabis 2X Leveraged ETN (MJO) offers daily leveraged exposure to a cannabisthemed index. The marriage of exposure to a budding market segment, daily resetting leverage, and the exchange-traded note format make this a product that investors can easily pass on. 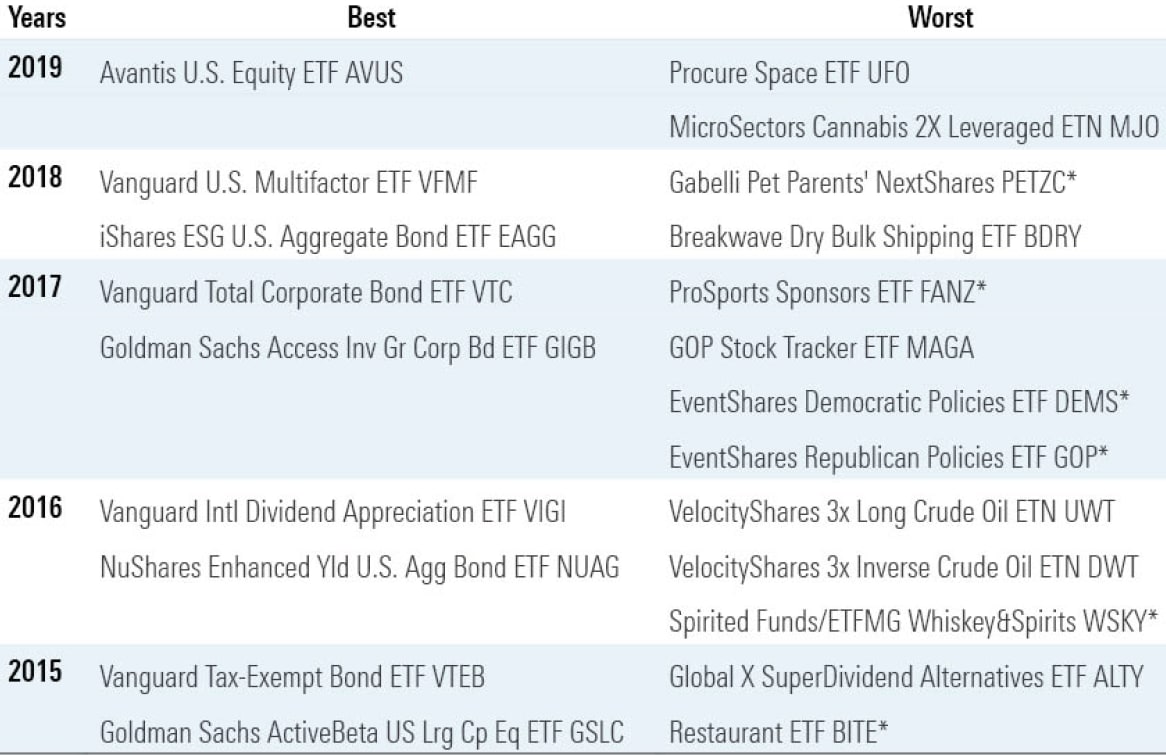 Source: Morningstar Direct. * Indicates a fund has been closed or merged.

Article reprinted with permission by Morningstar. Reprinted format may be different from original publication.

Exchange Traded Funds (ETF) are bought and sold through exchange trading at market price (not NAV), and are not individually redeemed from the fund. Shares may trade at a premium or discount to their NAV in the secondary market. Brokerage commissions will reduce returns.